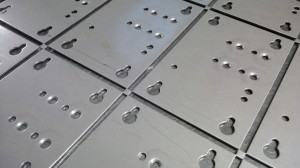 A great shot of stainless steel pump mounting plates after they have been CNC punched on one of our Trumpf CNC punch presses. The keyhole feature has been created by the use of a slot and circular punch. The countersinks have all been formed with the pilot hole and countersink form both taking less than 1 second each to produce, much quicker than drilling a countersink. These particular plates were 0.9mm thick 304 stainless steel but a range of thicknesses and materials can use this technique to produce quick and consistent countersink formed holes. For more information on our CNC tooling please take a look at Trumpf standard 2D tooling 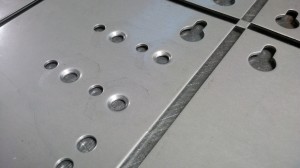 Close up of the formed countersink holes. The countersink form is created in two hits, the first being a simple round pilot hole to remove some of the material from the plate and the second hit being the shaped countersink form tool. Both operations are carried out in the cycle time of the CNC punch press and are part of the CNC program so that the finished form is completed before the sheet metal parts are broken out of the CNC punched nest. The parts were held in using a 0.1mm corner tag so that they could easily be broken out and then the tag was removed with the edge de-burring process. 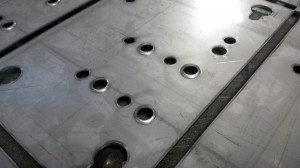 The reverse (die) side of the countersink form shows some material that has been formed through the sheet metal gauge. This is acceptable on these pump mounting plates as the plate does not have to sit down flush. The extra material also has the advantage over drilling a countersink hole in that it supports the complete head of the countersink screw.